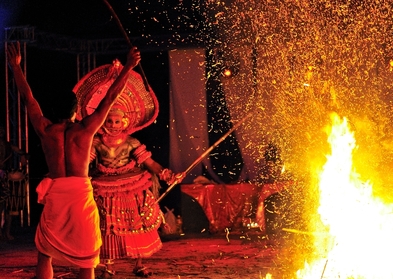 Legends and myths come alive in this ritual dance form of South India. Using dance, mime and music, Theyyam tells the stories of ancient tribal gods and heroes. The ritualistic dancing is believed to impersonate the metaphysical thoughts and expressions of immortal souls through a mortal body.

As one of the oldest art forms of the region, its roots are believed to date back thousands of years, even predating Hinduism. Performers wear colourful costumes and elaborate make-up to represent ancient gods and their powers. The awe-inspiring performances include over 400 different styles of dance, invocations and rites.

Experience Theyyam on a trip through Kannur, Kerala:

Our guides will not only help you access the performances behind the scenes but also decode the gestures and symbology behind the art form. Follow it up with a visit to one of the many coffee and spice plantations of the region. Or continue your sojourn through time at the ancient Edakkal caves that feature rock carvings dating back to the Stone Age!

Recipe of the Month